If you have ever done concrete work,  you know there are a few basic steps to constructing a concrete slab. After the prep and formwork, the concrete is placed, and screeded. Then it is floated, and finally trowelled. Trowelling is usually done in several steps, depending on the finish desired.

Of these steps, screeding is probably the hardest part (assuming, of course, there is not a lot of wheelbarrow work involved!). “Screeding”, or “striking” is the most important step in a concrete job to produce a true, flat surface. It must be completed quickly before excess bleedwater appears on the surface. Screeding levels the concrete with the top of the forms, fills voids, and forces larger aggregate below the surface.

On smaller jobs screeding is often done by pushing or pulling a wood or metal straight edge across the top of the forms. But how do they do bigger jobs accurately? 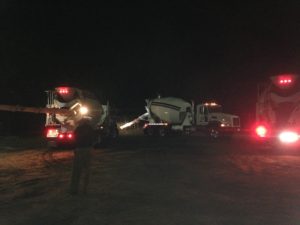 This job was a large shop for a car dealership. It was about 400 yds of concrete- that’s about 45 truckloads.   That’s a heck of a lot of concrete to have to pull with a 2×4!

Our solution to level the slab was to use a machine called a laser screed. Laser screeds are self-propelled four wheel drive, four wheel steer units. They are driven into the middle of the wet concrete, and positioned so their telescoping boom can reach the area to be leveled. The laser screed has an onboard computer which levels the machine by referencing a rotating laser beam which is setup in a fixed position. The screed has a 12’ wide placement head. The plow spreads the concrete evenly, the auger removes any excess material to set the finished grade, and the vibrator smoothes the surface.

The laser screed’s automatic laser control system uses electro-hydraulic controls to ensure a level floor. Laser targets mounted at each end of the screed head receive a signal from a transmitter several times per second, and the machine provides a completely automated control system for leveling. The laser transmitter has a range of up to 1000 ft and enables the screeds to work to very tight a tolerances. 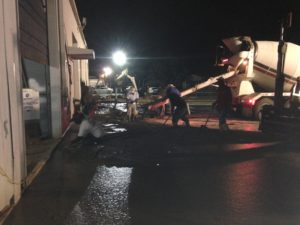 We started this job at 2:00 in the morning. We had about 25 concrete finishers on site, but the screed did all of the leveling work. By 5:00 AM all 45 trucks were empty, and the finishers completed troweling. 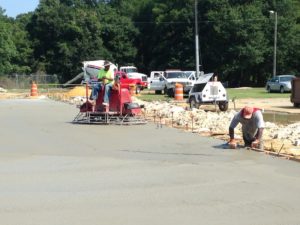 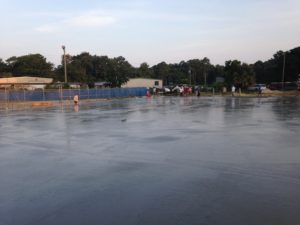 They used double blade ride-on trowels to complete the work as quickly as possible. It’s sort of like go-karts riding on fan blades! 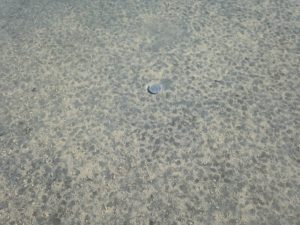 So, how’d we do? The first rain showed that standing water puddles were about the thickness of a quarter- that’s about 1/16”.  WooHoo!

Hopefully you won’t ever have to finish 400 yards of concrete in one night (and if you do, I recommend you call a few friends!), but even if it’s just a small porch stoop, by all means- go build something!