I did some whitewater rafting yesterday.

I went with a team of Boy Scouts. They were strong, and precise. We had a cracker jack team, and we were rowing like synchronized swimmers.

I was starboard lead, so I had a pretty good view.

The guide was obviously experienced, a bit cocky (they all are), and goaded us on with his stories about how crappy the last group of Scout were he rafted with.

That was like poking a bear- the boys had something to prove.

And our guide, Tater (is that a real name??) wanted an adventure.

He took us into a section of the river that I’m pretty sure they generally avoid. Class 4, 13,000 cfs. 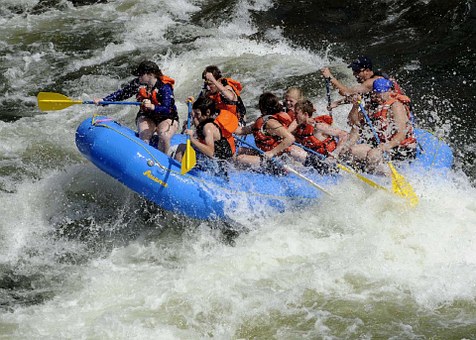 Sitting in the bow, I saw it. It was huge.

There was a nice 6′ crest we were going to climb, but there was a 15’er right behind it.

I remembering thinking, “Wow, it’s hard to believe a raft like this can climb a wave that big”, as I wedged my feet.

As we came over the first crest, I was looking down into a hydraulic between the 2 waves that was about the size of a car.

The boat dove deep into the hydraulic, and went end-over-end forward flipping onto the 15’er.

I was first in the water, and didn’t take long to need air. I tried to trust the PFD, but felt rubber above me. I assumed it was the boat. Before I finished that thought, I hit something mighty hard (rock?), then bounced again (up?). Everything was orange, and I realized I was under the boat. Grabbed some air, then got sucked back down.

I have no idea how many times I tried surfacing after that- I remember hitting the bottom of the boat 4 more times, but now it was flat plastic- the boat had been righted, and I was under it, but also completely disoriented. The PFD kept trying to carry me up, but the boat kept me from being able to surface.

I don’t panic easily, but I was out of ideas, and out of air. I decided it was time to stop fighting the river.

I tucked into a tight ball, and the next thing I knew the river spit me out over 100′ from the boat.

I was spent. I just lay there on my back, coughing up water and spitting up in my own face. I didn’t care. I had found some air.

The first thing I remember after I started thinking again was the sound of my 14 year old son shouting, “Dad, you OK?”. I answered firmly, and confidently (trying to give him some assurance), “Yeah. I’m fine. Are you OK?”.

Man it felt good to hear his voice!

The other adult in our boat was picked up by our boat. The 4 Scouts were picked up by another boat (and they finished out the trip with 11 in a 7 man boat).

I never made it back in the boat. I was much too far from them. Just floated and breathed, and listened occasionally to the guides shouting some swimming directions to me to avoid the rocks.

What did I learn?

So, how was YOUR weekend??

It’s probably a lot safer if you just GO BUILD SOMETHING!